How a Metal Roof Can Improve a Building’s Energy Efficiency

Year after year, professionals in the construction industry place an increasing amount of emphasis on energy efficiency. An article in the Journal of Architectural Engineering Technology informs us that the energy efficiency of a new building is slowly becoming the most important feature to determine quality. But according to the American Council for an Energy-Efficient Economy (ACEEE), in 2015 the United States ranked 13th out of 16 major economies. This ranking comes from the council’s yearly scorecard. This scorecard ranks major economies based on their policies and programs encouraging energy efficiency. The following quote from ACEEE’s executive director was provided by USA Today.

“The United States, long considered an innovative and competitive world leader, has progressed slowly and has made limited progress since our last report (in 2012), even as Germany, Italy, China, and other nations surge ahead.”

The silver lining in the report was that the United States placed 8th in terms of energy efficiency in regard to buildings. Despite the loss in rankings, the United States hasn’t passed a major energy bill since 2007, and a bipartisan bill put forth to promote efficiency was shot down by Congress in May of 2015. Nevertheless, architects, contractors and homeowners are making product choices in an effort to increase the energy-efficiency of their homes. This is an important transition, as buildings are responsible for nearly half (47.6%) of the energy produced in the United States, and nearly half (44.6%) of CO2 emissions, according to the U.S. Energy Information Administration. As energy efficiency becomes ever more important in construction, it is important to consider the effects of roofing materials on the building’s energy efficiency. Metal is highly regarded as a ‘green’ roofing material, and can even save homeowners money on their utilities. The Metal Roofing Alliance is an organization dedicate to informing the public about the benefits of metal roofing. The following information from the Metal Roofing Alliance illustrates how efficient a metal roof can be:

“As reported by the Cool Metal Roofing Coalition and the Oak Ridge National Laboratory, installation of reflective metal roofing can save your home up to 40% in summer cooling energy costs while highly emissive metal roofs can reduce urban air temperatures by as much as 12°F. Combined, these benefits mean less money out of your wallet, less dependence on energy resources and less general air pollution in your neighborhood and across the nation.

The secret to metal roofing’s energy savings is in its variety of finishes. As shown above, the basic, unpainted metal roof will reflect much of the solar radiation usually absorbed in your attic and home by an asphalt roof. But, for homes in warmer climates, pre-painted or granular coated metal roofing systems not only reflect solar energy but also cool your home by re-emitting most of what solar radiation is absorbed. Where annual cooling loads dominate, a highly reflective and highly emissive painted or granular-coated metal roof is optimal for reducing energy consumption and can actually re-emit up to 90% of absorbed solar radiation.

Additionally, most metal roofing, including standing seam, is composed of recycled material and can be installed directly onto an existing asphalt roof, reducing landfill waste and promoting quick installation as well as decades of environmentally-sound, maintenance-free strength and beauty.”

If you would like to discover how a metal roof from Principio Metal Systems can save you money in a variety of ways or would like more information about our roofing systems, give us a call at 970.712.0758 or contact us. 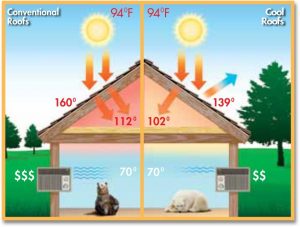